In a recent survey done by TRAC FM, 60% of the respondents did not have or even know about certificates of occupancy (COO) or Certificates of Customary ownership (CCO). These certificates protect the interest, ownership, occupancy rights of a person, family or community on land (as indicated in sections 4 and 33 of the Land Act Cap 227 of 1998). At BarefootLaw, cases relating to land law constituted nearly twenty percent of the total case load of 2020. 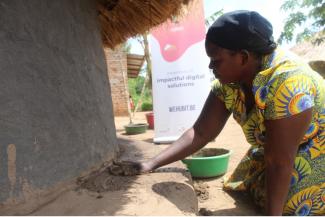 Janet Akello plastering one of her houses (© BarefootLaw).

Sister and brother, Janet and Geoffrey have been victims of consequence resulting from the ignorance of COO. The two have not seen eye-to-eye for close to seven years now. In 2015, Janet's husband Samuel Ssentongo who was not a native of Omoro district needed land to settle his family on. He finally purchased land within Lakwana subcounty with a loan acquired from one of the financial institutions within Omoro. The couple needed to pay the loan back and sought Geoffrey's assistance. Unfortunately, he too could not lend them money, so instead offered bulls for them to sell and subsequently use for the loan repayment. The grateful couple did just that but as time went on their combined incomes could not amount to what they owed Geoffrey. Ssentongo decided to give a portion of his family's land to Geoffrey as interest for the money they owed him. Unfortunately, he passed on in 2017 leaving Janet with four children to raise, and a debt to shoulder alone. At this point, Geoffrey felt stuck because his widowed sister was occupying the piece of land, she owed him and remained silent about his disgruntlement in fear of spoiling his relations with her. His sister, however, narrates that Geoffrey continued to demand for his land. ‘‘He threatened to pray for my death, if I did not pay him what I owed,’’ a tearful Janet says.

The role of the radio 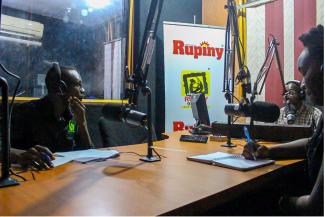 A key pillar of the BarefootLaw outreach model is radio because of both its flexibility and affordability, according to the National Information Technology survey of 2017/18, 78% of individuals said they listened to the radio.

Radio has been very instrumental in disseminating legal information and guidance in the LEWUTI project. Through talk shows, BarefootLaw enabled to bring the law to families in their homes. BarefootLaw's legal team tailor content pertaining to the most pressing legal needs and go on to engage the public through these radio engagements. BarefootLaw knows that an hour-long show does not suffice in answering many legal questions, therefore BarefootLaw strategically uses the platform to inform the countless listeners about the BarefootLaw tools through which they can receive free legal guidance.

Geoffrey first heard of BarefootLaw through a talk show on Radio Rupiny and contacted BarefootLaw on its SMS platform. One ofBarefootLaw's lawyers, Kennedy Kasozi received the message and continued to arbitrate the issue.

On listening to Janet’s recollection of the events, it was learnt that she and Ssentongo her late husband had tried to pay back part of the loan, but Geoffrey had rejected it. ‘‘He asked us to hold on to the money until BarefootLaw made the full amount,’’ Janet says. She adds that after the death threats, she requested her brother to forgive her debt, since she had children to care for, one of whom was Geoffrey’s daughter. 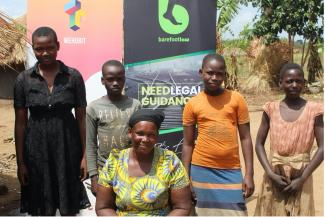 Janet and her children posing for a family photo (© BarefootLaw).

On his journey of thought and silence towards his sister is when he listened to the radio and met BarefootLaw. Lawyer Kasozi informed Geoffrey that the dispute with his sister could be resolved through one-on-one mediation where both parties would find a fitting solution. With a light heart, Geoffrey called Janet and buried the hatchet. ‘‘My brother asked for forgiveness and told me to remain on the land, continue farming and care for the children,’’ Janet narrated. He added that when she gets money in this lifetime, she will pay him back.

The two siblings live on amicably.

Note: No photos of Geoffrey appear because the BarefootLaw team was unable to meet him during her trip to Gulu.